Pete, a guinea pig, had a nice, warm cage with plenty of food and water. The four children in the family took turns cleaning his cage and playing with him. He liked to be out of his cage and run around with the children. It was so much fun! They were very gentle with him and gave him lots of love.

Things were fine until the family brought home another pet. Pete was out of his cage at the time. This was a  creature that he had never seen before! He jumped back into the cage and wouldn’t come out. The children tried calming him down and telling him it would be okay. Nope! Pete was NOT coming out of his cage. This new pet was called a cat. It made a horrible hissing sound and had very sharp claws. Pete stayed in his cage for many days and felt sad that he couldn’t get on the floor and play anymore.

Several months went by. The cat seemed to change and wanted to play with Pete. He didn’t hiss anymore or show his claws. He would stay by the cage and just look at Pete. “Well”, thought Pete. “Maybe he’s not so bad, after all!” The children forgot to close the cage door one day when they were done cleaning. Pete stuck his nose out very slowly. He sniffed noses with the cat. Nothing bad happened! After that, Pete and the cat were down on the floor everyday playing with the children. One day, Mom found Pete in the teapot. She wondered why he had done that, so the cat explained: 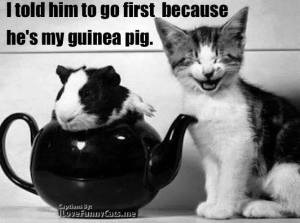 Marion Lovato is the author of Sam, the Superkitty.  Her book describes an ordinary cat changing into a superhero to protect his family from things that go bump in the night.  Available on Amazon as a paperback or Kindle edition.  http://www.amazon.com/gp/product/1604588667